So beta yesterday of 11 is not great. The nurse was not optimistic and didn’t offer much in terms of explanation – I also didn’t ask. So I’m going in tomorrow for a second blood test, but all I want to know is how soon until my period start.

Believe me, yesterday was not a good day. Hubby went spiralling down and then started telling me about the “research” he did on low beta levels and how you can still be pregnant. I’m of the view that if you look for something  (in this case forum evidence of miracle pregnancies), then you will find it.

Today I’m feeling some of my typical PMS symptoms, being tension headaches, chills and funny tummy sensations. Sigh. What a ride…

No signs of AF this morning.

And we wait for THE phone call.

Ok. So this morning I went nuts. There was lots of crying, getting grumpy, getting angry and more crying.

We went out of fancy breakfast. And I was still grumpy. The waitresses were making me really grumpy.

We decided that I  should POAS when we got home. So we had to go via the shops to pick a HPT up, given that I’d been pretty adamant up until then about not testing. 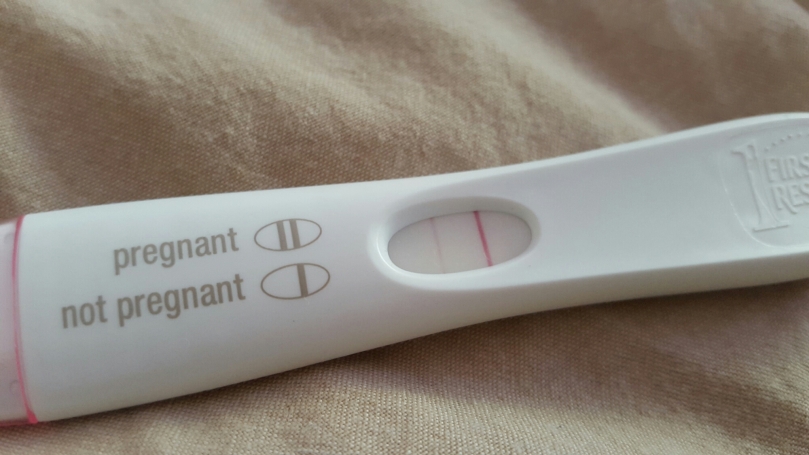 That’s the result from a second wee, about 3 hours after my morning one.

– first “serious” episode of insomnia last night, which wasn’t as bad as my usual pre-AF ones

If it weren’t for this cycle, I’d usually not even notice those symptoms.

So with all of my previous transfers  (and there have been a few!) I’ve gone through the usual ups and downs and emotional torture. And then I’ve always had the very distinct “I don’t feel pregnant” feeling. I assume it’s come from those pregnancy hormones  (whether natural or artificial) suddenly leaving the body in droves.

Based on that I very much entered into this cycle thinking, just trust my body, it hasn’t lied to me before. It’s also helped to push away any desire to POAS.

This time around I have symptoms, can’t say if they’re pregnancy symtoms or PMS symptoms, or even if they’re just nothing. But I have symptoms (minor cramping/twinges, dehydration, minor insomnia and vaguely sensitive boobs) and constant fear that AF is coming. No signs of spotting yet, but that’s typically started anywhere from 8-10dp5dt. They’re all cruel, but the cruelest was probably when my spotting started 2 hours after I made it to 10dp5dt and had just had my blood test.

That’s where I’m at. Had a teary meltdown this morning. Hubby does not help. I think he just doesn’t know what to do – or he’s not thinking about it enough. Maybe a bit of both. But I mean, he’s been at the beach for 5 days, while I’ve been at home by myself each night after work, and when I called him at 5:15pm on Friday  (having had to do a 7 hours round trip site visit) to see what the plans were for that night, he was at his mum’s house having a bath. Seriously?

Anyway, fingers crossed for no spotting. Two days to go.

That’s my biggest concern at the moment, that I have PMS. I mean, pregnancy symptoms are essentially PMS.

There was insomnia last night. That, combined with dehydration, is my usual biggest sign that my period is coming. It normally arrives the next morning, but I’m still a couple of days away from my typical day 1.

Still no POAS urges. Hopefully I don’t go crazy over the next couple of days.

Crazy sudden bloating. Hurts. Feels like I ate a balloon and now it’s inflating in my tummy. Can’t even finish my lunch.

Is the bloating and tummy pains from the decaf coffee that I  drank 4 hours ago? Is it from the handful of cherry tomatoes and purple carrots that I ate 2 hours ago? So bloated!

Still bloated. Gassy. Minor constipation. I am vegan. Vegans don’t get constipated. In fact, have been dehydrated for past 2 days and had noticed that my [TMI alert] poos had been becoming sticky.

Having bouts of extreme tiredness. I really hope this isn’t just PMS having a field day.

So it’s started. 6dp5dt and I’m starting to think “ooh, maybe I am pregnant!”

My symptoms? I have none. Or rather, my symptom is that I don’t feel pregnant. And the first time I was pregnant, I didn’t feel pregnant. I am having a tiny bit of sleeplessness. And by that I mean, at night I don’t want to go to sleep because I feel as if I’ve had a late cup of coffee and can’t sleep. And I’ve been waking up around 5am and feeling very alert. The first time I was pregnant, the only early symptom that I had was insomnia.

So there you go. Not too many usual PMS symtpoms appearing, e.g. insatiable hunger. Got a couple of pimples, but not very many at all. Negligible I’d say. I did get a surge of oily skin yesterday, but that’s gone now too. So I don’t know. I mean, we’re not far off from 9dp5dt, which is when my first spotting usually occurs before AF arrives. So really, there’s still a few more days of obsessing to go.

Still no urge to POAS, which is good. I mean, let’s face it, whether there’s spotting or just full on bleeding or not, they’re still gonna make me take the blood tesr on day 10.

So. I’ll just keep waiting. Keep distracting myself with lots of TV. Keep my head above water at work. And just wait.

Minor heartburn last night, but I’d had a bit of dairy and mayo, which I don’t normally have

Didn’t sleep super well and was awake very early in the morning, but it was hot overnight

Random twinges and short sensations of bloating, but that could just be PMS

Back to top
Occasional Outcry
Create a free website or blog at WordPress.com.